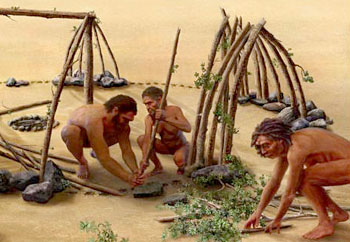 Terra Amata is the name of the place where the first known inhabitants of Nice used to live, not far from the museum. They settled here 400,000 years ago. That's a very long time and they really are among the first europeans. As a comparison you should know that the Lascaux cave paintings are 17.000 years old only. 25 times less.

At the time, the sea was higher than it is now, and the castle hill was an island. The place was next to a cove where the Paillon river had its mouth. Men settled here for a few weeks at the end of spring. They were ancestors of the Man of Neanderthal. On the beach (it was not in a cave), they made a fire. The rests of the fire were found, with a footprint 400,000 years old and a milk tooth. They were hunters, chasing deers and elephants.

Terra Amata is the oldest controled fireplace discovered in the world, only to be compared with a similar site in China.

The place was searched in the sixties by Henry de Lumley. See hominides.com if you can read French to know more about this paleolitic settlement.

The museum isn't very large. It was made more fashionable in 2016. It exhibits traces of these people, objects, tools, model reconstitutions which will enables children (but not only) to imagine what kind of life they had. You can visit the museum within an hour and therefore it won't bore your children.

The entrance ticket entitles you to visit the Roman archeology museum and the Natural History museum at no extra cost, within 48 hours.

The museum is located East of the harbour, at the start of the "Basse Corniche".

Musée Terra Amata
25 bvd Carnot, Nice
Open every day 10am to 6pm, but on tuesdays and some public holidays. On mondays, visits are limited to groups.

Map of the location of the museum.

If you're interested in prehistory, there is an other Museum about a old settlement, The Lazaret cave.