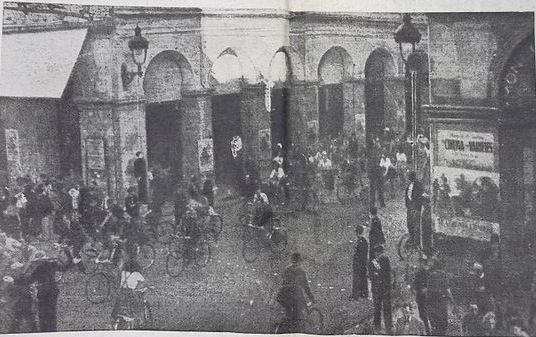 Today, that's the Galerie Lafayette arcades, Jean Médecin street. On July the 7th, 1944, the nazis hanged to the street lights of these arcades 2 Resistants who had been denounced and captured in Gattieres, a village of the Var valley. Their names were Séraphin Torrin et Ange Grassi. The hanging occured in front of a crowd which had been foreced to attend and the corpses remained hanged under these arcades for 3 hours.

The military headquarter of the Wehrmacht (army) was located in the Atlantic Hotel, 12 bvd Victor Hugo, an hotel which still exists.

To know more about the deportation and mass murder of the Jews of the area, which was planned in the Excelsior Hotel, read this article. 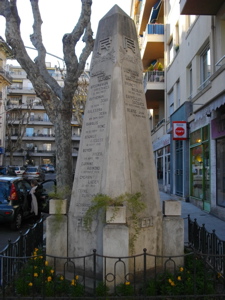 After the Provence allied landing, the troops head North and towards Marseille. Nice is not a military priority. A comity of local Resistants therefore decides, on August the 27th, to free the city the next day. They met in the Stella palace, 20 avenue de Cessole.

This monument is located at the "railway crossing" (Passage à niveau) where the first fightings of the insurrection in Nice, August the 28th 1944, occured. It bears the names of the Resistants who died that day.