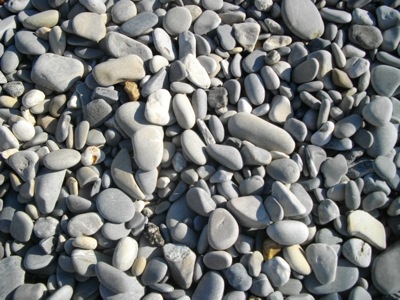 The beach in Nice are all pebbly. Pebbles don't feel as hot as sand but that's the only good news. To walk on this stones is a torture if you don't wear shoes. And returning to the beach from the water... To lie on the beach without a good mastress is not nice either. It seems that each one of these damned stones wants to get between your ribs.

Moreover, the beach is overcrowded in summer. To avoid the crowd come (early) in the morning.

To find sand beaches you have to go elsewhere. Read this article about the beaches of the Martime Alps.

The good news is that the water is clean. Nice got the Pavillon bleu once again in 2015 for the Fabron and Coco beach beaches.

There are 20 public beaches and almost as many private beaches. The private beaches all have a restaurant. Some of them offer water activities such as jetski, flyfish, flyboard, parasailing...

Here is a list of all public beaches, from the West to the East:

in front of the old town:

East of the harbour: