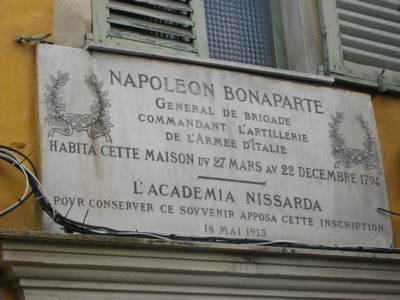 We are in 1794. Napoléon Bonaparte is then only a modest General who has just crushed a royalist rebellion in Paris. To thank him, Barras, one of the 5 people leading France in the "Directoire"  has just given him the command of the army of Italy. An army which lacks everything.

It is in Nice that Bonaparte meets his troops. He will stay in the street which today bears his name during several monthes, at number 6, not far from the Garibaldi square.

You can't visit the place. People live there. A simple memorial above the door remind people that here stayed the General who was beginning his epic story.