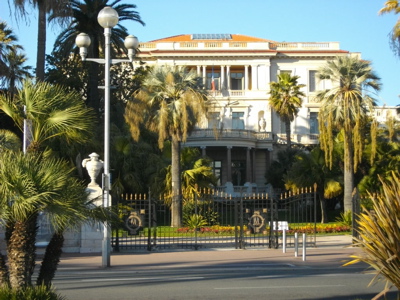 In spite of its name, the museum has almost no links with the Genral Massena, the Empire general who was born in Nice. The only one is that the large and magnificent building which houses the museum was built by the soldier's grand son.

The museum is dedicated to the history of Nice, but on a very narrow period of time, from 1870 to the twenties, la "Belle epoque". Barely 60 years.

It houses a mortuary mask of Napoleon, a diadem of empress Josephine and several landscape paintings.

The dwelling which houses the museum is a fine exemple of a luxurious residence of the early 20th century, in an exclusive location on the sea shore and along the Promenade des Anglais. We can only imagine what life must have been then, without the dozens of thousands of car passing now every day in front of its gate 24 hours a day.

Musée Masséna, 65 rue de France, (next to the Negresco hotel). Open every day from 10am to 6pm but on tuesdays, New Year's day, Easter, 1st of May and Christmas.