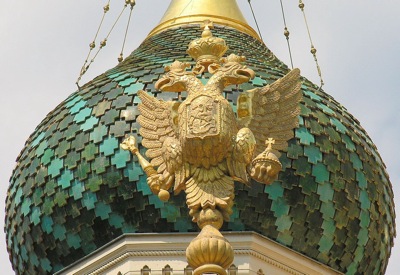 The first Nice orthodox church was built in the middle of the 19th century on Longchamp Street. It still exists. The money was raised by the tzarin.

The cathedral was built in the beginning of the 20th century. Its location was not chosen randomly. It is there that the elder son of the Tzar Alexander II, the Tzarevitch Nikolaï died aged 20 in Nice, killed by a meningitis. His father bought the house where he had stayed, tore it down and built at the very same place a little chappel to honour his son.

The cathedral was built later, in the park surrounding the former villa, next to the chapell and was inaugurated in 1912.

Alexander II was one of the greatest and most modern Tzar. He abolished serfdom and forbade hostile acts against jews, being nicknamed "Alexander the Liberator" in the process. He reformed his administration, supported the movement towards Finland independance. On the contrary he reinforced the domination of Russia over Poland and the baltic states. He died murdered by an anarchist whereas his was about to create an elected parliament. His son Alexander III who became tzar backpedalled and cancelled most of his father's reforms.

The cathedral now belongs to the Russian state and is directly linked to the Moscow patriarchy.

It is possible to visit it when there are no religious services. Its golden and vividly colored domes can be seen from the "Voie rapide" and it is one of the most visited monuments in Nice.

To know more about Nice the Russian.