Cannes is a fairly small town. Together with its neighbours, (Le Cannet, Mandelieu), it forms but one urban area.

The most iconic place in Cannes is the Croisette boulevard, going along the sea and the sand beaches from the old harbour, West, to the Palm Beach cape, East. The district between the Sea and the "voie rapide" (urban freeway) is the commercial district of the city with the Antibes street as a main street. The famous "Palais des Festivals"  is located at the Croisette end, near the old harbour.

West of the old harbour, the Suquet hill, topped by a little church and the ruins of  castle. This is where the old city is. It is nice to wander in these streets.

Further West, beyond the Suquet, other districts where you probably won't go unless you stay there, such as "La Bocca".

On this picture, the Croisette is in front of us. On our right (pan the camera), the famed Palais des Festivals with the "Stairs". Further right, after the unavoidable casino, the old harbour and, behind it, the Suquet hill. If you keep panning, you will see in the distance the city hall and the de Gaulle square. Pan some more and you will be looking in the direction of the shopping district before you face again the Croisette.

The Carnot boulevard heads Northward, towards le Cannet and the highway. It can be really jammed on some occasions and then, going to the highway or in the opposite direction can be a nightmare. If the road is not jammed, beware: the speed limit is 50km/h, even on the 4 lanes part near the highway.

It is a good idea to come to Cannes without a car. The train station is very close to the shopping district and the Croisette and the city can easily be visited by feet because of its size.

The bus station where the buses coming from other cities (Nice...) stop is next to the city hall and the old harbour, 2mn walk away from the Palais des Festivals.

The quality of the air in Cannes today, and the forecast for tomorrow :


The city is world famous because of the Cannes film festival. There are other important events :

If we mention these events that's because they attract visitors from all over the world and therefore it is much more difficult to find  accomodation in Cannes then.

There are several very famous hotels in Cannes. The Carlton, the Majestic, the Palm Beach.

To book your room in Cannes or simply get an idea of the rates and the availabilities when you come, use this searching tool. It includes customers opinions to help you make your choice.

During importants events such as the film festival, do not hesitate to stay rather in Nice or Antibes and simply come and spend a day in Cannes. It will be much easier to find a room and the rates will be lower.


There are not many interesting monuments in Cannes. There is a small museum on the Suquet hill. The hill itself is nice. The Croisette is unavoidable.

According to us, the best thing to do in this city is to take a boat and go on one of the two Lerins Islands facing the city. Do not forget either to walk or hike in the Esterel (next page).

If you can afford around 100€ for this, (for 3 people), you can go to the nearby Cannes Mandelieu airfield and contact one of the aeroclubs to get a short flight around the islands. (The flight may not last longer than 30mn). Do it when you have visited the place on the ground, it will be more interesting.

If you stay in Cannes use this agenda to know the cultural events which you will be able to attend. 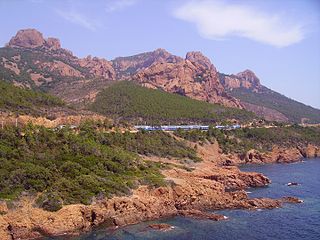 The Esterel is made of the little mountains which you can see from Cannes, looking Westward. With their ocre rocks disputing the Sea blue, they offer wonderful sightseeings. You should consider hiking there at least once. Unfortunately for us, they are not in the Maritime Alps. Proceed along the sea shore road, heading towards Frejus. With lots of curves, it offers great views on the Sea and the large villas there.

If you do but one hike in the Esterel, choose the Cap Roux (red cape) mountain. It is 300m over the Sea level high and anyone in good health can make it. No climbing. It's only a hike. The first part of the hiking is on a paved road, but there are no cars, because the road is closed. Then, when you get to the large rock on your left, and the road makes a pin hair curve to the right, follow the trail along the crest on your right. It will then turn towards the top. There, the sightseeing will reward you for your efforts.

Use this image to find the start of the hike, on the Trayas road.

Beware : in summer this hike is in direct sunlight and it's very hot because of the rocks. Hike early in the morning or in the evening, not too late to have time to be back before dawn. Bring lots of water, especially if you have children (if they are young consider an other walk as an alternate...) In winter on the contrary, it's a perfect plan.