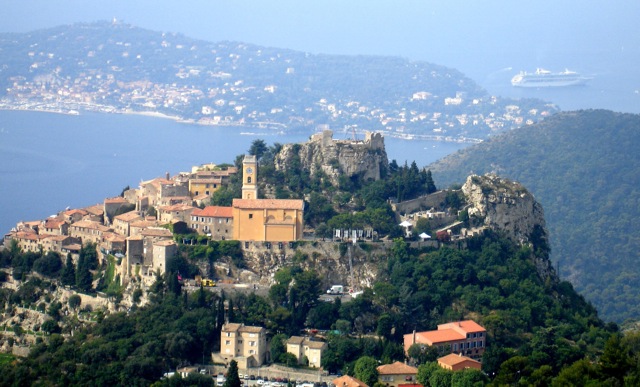 It's a very quiet village on the Low Corniche, with villas on the slopes. You can go there by bus from Nice (line 100) or by train. The train station is right next to the beach and you'll be able to come here to avoid the crowd and the pebbles in Nice.

There isn't much else to visit and do in Eze Bord de Mer. We just mention the "Nietzsche trail" going to the old village. It was given the name of the philosopher because he lived in Eze for a while. The beginning of the climb is nice because themore you walk the more the view widens. But the end is less interesting because you are in a hollow and you don't see much any longer. Beware the sun in summer, no shade.
To find the start of the trail (2mn from the station), first go on the Low Corniche road, cross it (there is a pedestrian bridge and a zebra crossing) and take the street going up just right after the zebra crossing. It's a street first which cars can use but soon it'll be a rocky but usable trail.

2km after the village there is a tunnel. If you take the road on the right just before the tunnel (coming from Nice) you'll drive along the Sea and will meet the road at the exit of the tunnel. (That's actually the old road). You'll passs under large properties and next to the Hotel du Cap Estel*, a high standard hotel next to the sea in a very quiet place and with a Michelin 1 star restaurant. 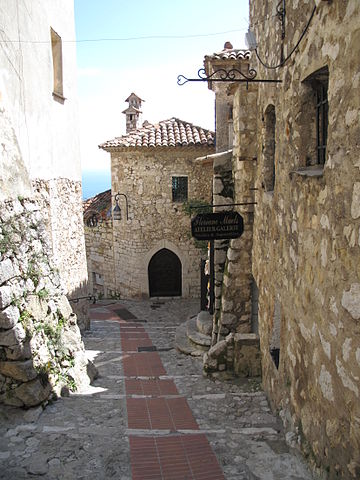 That's the name given to the old village, in opposition to Eze Bord-de-mer.It is located on the Moyenne Corniche, on a rocky peak. That's the most famous of all the perched villages of the Riviera. The location is really magnificent and the village pircturesque. But Eze is overcrowded with tourits in summer. You'll see that eveything is made to "welcome" them. Souvenir shops one after the other in the streets, selling anything. That's a chump bait in our opinion. You might even find real local products there, but we can't garantee it.

Something really frustrating in Eze is that nowhere, from the streets, you can see the Sea. You have to enter a house to be able to enjoy the sightseeing, meaning a shop or a restaurant. Other solution, climb to the castle ruins, on the top of the village. But you will have to pay to enter them and there is no point apart from the view. It isn't worth the money. We advise you, if you go to Eze, to go a little further to the Col d'Eze (Eze pass on the High Corniche.) From there you'll have an even more beautiful panorama with the village in the foreground.

If you can afford them, Eze village has several high quality hotels. You can choose and book your hotel in Eze right here. Let's mention 2 hotels which have great views on the Sea and, more importantly, Michelin starred restaurants : La Chèvre d'Or** et le Château Eza*.

To go from Eze Bord-de-Mer to Eze-Village by car is not easy. There is no direct road. You have to leave Eze Bord de Mer eastbound and after the tunnel and a large right hand bend, a road starts backwards on your left and leads to the Moyenne Corniche.

It is located on the High Corniche. You'll get there easily from Eze-Village via a steep road. At the High Corniche crossroad you're 500m (1600ft) high. Make a right and a few hundreds of meters further pull over to enjoy the sightseeing. You won't regret not to have been ripped off to see the village castle's one.

Since you're there, go the Revere fort, 700m (2300ft) high. From there you'll have an incredible panorama*** not only towards the sea, but also the mountains. (Go ahead in front of you at the High Corniche crossroad when  you come from the village.) If you don't want to climb that far you can also make a left on the High Corniche towards Nice and pull over a little further when you see the Mountains on your right, close to the hôtel. But it won't be as good.

There is a departemental natural park nearby, with a trail where you can run among the pines. The road (an old roman road) starts next to the Hermitage du Col d'Eze hotel. Go 1km further to find the parking lot.