The legend is terrifying. In 1348, the queen Jeanne of Napoli is accused of having murdered her husband. She takes refuge in this village, chased by her brother in law's troops. On the Christmas evening the soldiers manage to enter the village and when the queen comes back from the Christmas mass, she is served a meal. Actually without knowing it, she is eating her own children. She then curses the village and the malediction will last for centuries, leading to its abandon after a long succession of disasters.

Actually, it's the plague which strikes this year, and a violent earthquake. Jeanne never came here and besides, never had children who lived. 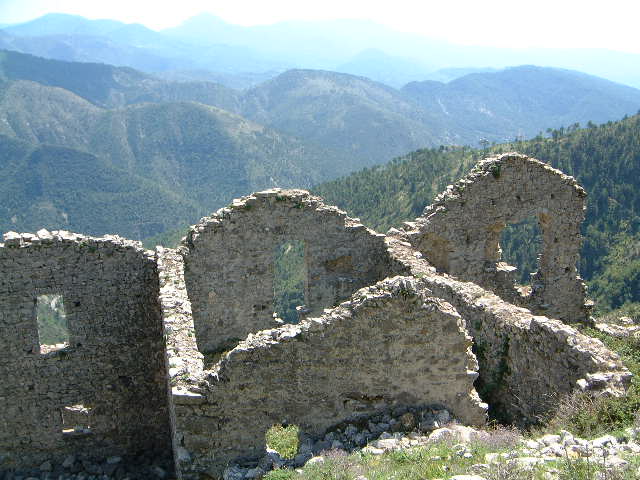 After a new strong earthquake in 1618, most inhabitants leave the village to settle in Duranus, downhill. 100 years later the priest is the last one to leave the place.

Duranus is famous because, during the Revolution, it was a stronghold of counter revolutionnaries. They were known for their cruelty. An other legend says that they used the ruins of Roccasparviera  as a shelter at the time and that they forced French soldiers to eat there the heart of their officer. Yes, that's 2 legends linked with cannibalism...

The narrow and windy road going from Levens to St Jean la Rivière passes through Duranus. Just after the village's exit when you come from Levens, pull over at the "Saut des Français" (Frenchmen jump). It offers an impressive view on the Vesubie gorges, 200m lower. The royalists have pushed French Republican prisonners in the river from here during the Revolution. Hence the name.

Nowadays, apart from the ruins of the old village there is in Roccasparviera a St Michel chapel which was built at the exact location of the former church, in the 18th century.

From the "Saut des Français" you can walk uphill to Roccasparviera in one hour.

If you like ghost towns, Chateauneuf villevieille is easier to get to.