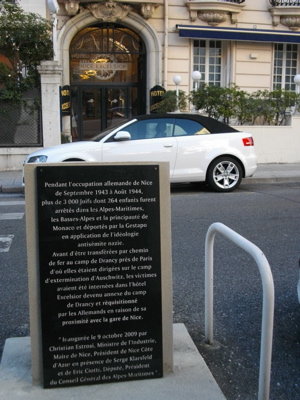 Nice occupation by the Italians was strongly ressented by the population. But the Italians did not chase Jews and did not gave them over to the nazis. On the contrary, they protected them, refusing to arrest them as was requested by Vichy and the nazis. So that Nice became, little by little an asylum for this population.

When the Germans invaded the Alpes Maritimes, they sent one of the worst SS to lead the local Gestapo and chase the Jews : Aloïs Brüner.

It is in this hotel, next to the train station and from which the prisonners could easily be sent to Drancy and then to Auschwitz that the bastard established his organization. Here people were tortured and executed in cold blood. For monthes, until the liberation of Nice, "the Excelsior", like the "Villa Trianon", was an other name for terror and death.

Brünner will be confronted by the bad will of most of the Nice population. The prefect Jean Chaigneau destroyed the files inherited from his zealous and Petain supporter predecessor Ribière and  even hid Jews in the Prefecture. The Nice archbishop, Mgr Paul Remond, organized the rescue of many jewish childrenwhose parents had been arrested by hiding them in catholic schools. Jean Chaigneau, also a Resistant, will eventually be arrested and deported.

Today, the hotel is back to its original purpose : welcome visitors. But its walls have probably kept traces of the hoorros which took place here. A simple monument was erected in front of the hotel to keep this souvenir alive.

Brünner died (almost) unharmed in Syria, protected by the Hafez el Hassad regime which continuously refused all the requests of extradition related to him.

The other place where many Jews were gathered before being sent to the death camps is the Auvare Casern, 28 rue Roquebillière, where police and gendarmerie were and still are barracked. More than 1000 Jews stayed there on their journey to Death. This happened in the summer 1942, before the Italian occupation. These people were arrested by the French police, by order of the Petain administration.

To know more about Nice under nazi rules, read this article about the Arcades of J. Médecin street.