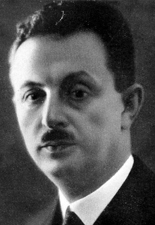 His attitude during WWI entitled him to get the "Legion d'Honneur" and the War cross.

During WWII he supports Petain and votes him full powers in 1940 as the Alpes Maritimes senator. His attitude, among others towards the Jews, is considered too mild by Vichy's most zealous supporters. He opposes Nice annexion by Italy in 1943 and is thrown out of duty by the Italians and later arrested by the Germans, helped by French milicians. Deported, he manages to escape in Belfort.

Charged with collaboration and first defeated in the mayor election after the war, he however gets back, little by little his differents seats, several Resistants supporting him.

He supports de Gaulle's opponents during the presidential election in 1965.

His son Jacques becomes mayor after his death, until he has to flee France hastily, having to face very serious charges of corruption.

Jean Medecin deeply changed the face of the city. He fitted out the Promenade des Anglais, created the "Voie rapide", the exhibition center, covered the Paillon river, extended the airport terminal...

The main road of the shopping district, in the heart of the city, and former "Victory street" was given his name by his son.